Carbon dictates consumption (is it serious?)

Carbon dictates consumption (is it serious?)

I am very happy to write this article. I think I grew a leap as an aquarist and a scholar in these last few weeks that I dedicated myself to studying a topic that came up by accident. I was fortunate to have those Eureka moments and wanted to write to you quickly, but I stopped and thought for a long time about how I should convey this in the form of an article.

The question arose from a simple question I had for a long time, but I had never dedicated much time to study about it. If the oxygen exhaled in the pearling of plants comes from the photolysis of water (we studied this in Book 2) and not from CO2, why does the pearling increase when we increase the concentration of CO2? What is the relationship of CO2 with water photolysis if photolysis is a light dependent process and apparently has nothing to do with carbon metabolism in the Calvin Cycle? It wasn’t a simple answer for a very simple reason: who cares? The CO2 in the atmosphere is not a variable as in the aquarium for universities to study its influence on water consumption by plants. Oops! Unless I look for predictive research on rising carbon in the atmosphere, global warming, that sort of thing. And I found several very interesting researches subjecting plants to conditions of high concentration of CO2 inside greenhouses. This is yet another example that understanding the questions is more important than getting the answers (I always say that). So, I did my homework and studied the subject carefully. 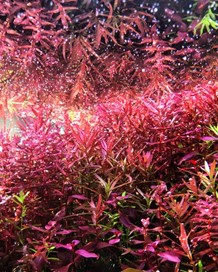 Rotala indica showing intense pearling due to the elimination of O2 from water photolysis.

Some might ask me, “but didn’t you see this before writing Book 2?” No. These researches are relatively recent and do not appear in botany books. There was a need for a question or some hypothesis that would lead me to these studies and it is in this part that my happiness comes into play. I’m happy that my works are not fully completed, that knowledge evolves, that I don’t know everything and, most importantly, NOTICING that I don’t know everything. When new information appears, it is necessary to relate it to other things I already knew (or thought I knew) to see if there are no contradictions, to see if one thing does not invalidate the other, or if it validates, if they are complementary. All new knowledge impacts the old knowledge load and is this analysis that takes time. Well, in that case things don’t invalidate themselves (whew) but complement each other in a catastrophic way. This is where the article begins.

I recommend that you study the fundamentals of rhythm, demand, and resource covered in Book 2 for a better understanding. This is the crux of the matter in the planted aquarium. Let’s go.

As light strikes the chlorophylls, an Mn-based enzyme extracts electrons from H2O molecules and sets them in motion in a process called photophosphorylation. We won’t go into the details of this, but this process basically generates some ATP and reducing power. When four photons of light extract four electrons from two water molecules, those molecules are broken down into free hydrogen and oxygen. Hydrogen is used to regenerate the reducing power, but oxygen starts to accumulate, and its concentration is very dangerous for the plant because it can take many highly reactive and oxidizing forms, including hydrogen peroxide (H2O2) and destroying cells. Plants then eliminate what they can by exhaling oxygen in the form of O2, which is pearling. Other forms of oxygen are neutralized by enzymes based on Fe, Mn and Cu depending on the cell compartment.

First law of rhythm: the amount of photons (light intensity) increases directly proportionally to the consumption of water. Therefore, more oxygen needs to be eliminated (more pearling) as a residue of this water consumption (which is why plants should not be watered at night; there is no light pulling the water inlet).

The second phase of photosynthesis, carbon metabolism, will use the reducing power and ATPs to turn CO2 into simple sugars in what we call the Calvin Cycle. The enzyme that operates on the Calvin Cycle, RuBisCO (writes it anyway), has components activated by light. Therefore, the more light, the more it operates.

Second law of rhythm: the amount of photons proportionally increases carbon metabolism. Here’s the first relevant board from Liebig’s barrel, carbon (the first real one is water, but we don’t need to worry about that in an aquarium).

The product of carbon metabolism then has two fates: to generate energy in the cell respiration process in mitochondria or to build carbon skeletons from which all organic molecules are made. If approximately 50% of the dry weight of plants is made of carbon, imagine the amount needed for growth, building enzymes, maintaining old organs, etc. And we’re not even talking about the carbon that will “burn” in respiration.

Third law of rhythm: The amount of metabolized carbon increases in direct proportion to the demand for nutrients that fill the gaps in the carbon skeletons and define the complete molecules. These nutrients are the smallest part of the plant’s dry weight, but it’s about their nutrition.

The construction of these structures requires energy in the form of ATP. A part of this ATP is generated there in photophosphorylation, in the first phase of photosynthesis, but the main balance comes from respiration. Respiration is much more intense during the dark phase, so don’t disturb your plants when they are sleeping by wanting to turn on the lights to show your beautiful aquarium to your envious brother-in-law. Some plants can completely interrupt the dark phase with a single flash.

Fourth law of rhythm: The more carbon absorbed, the greater the need for respiration.

Everything we’ve seen so far has been a flashy summary of the fundamentals of rhythm. Now for updates.

Research has shown that plants alter the speed of carbon metabolism also by supplying it. In other words, in the greater supply of CO2 the RuBisCO enzyme accelerates regardless of the light stimulus. This we didn’t know. This has only been discovered by researchers who fear high carbon emissions. But so what? What changes?

What changes is that the first law of rhythm, that light guides rhythm, is also true for carbon. Carbon is not only a plank in Liebig’s barrel, but it also increases its volume. This means that plants will demand more nutrients under high CO2 even if there is no change in light intensity. That’s why there’s more pearling with a lot of CO2 in the aquarium; the increase in CO2 increases the consumption of water and along with this also increases the consumption of nutrients.

This information has a few more important ramifications and answers another old question. Do high concentrations of CO2 harm plants?

Yes, they do. The excess of metabolized carbon ends up filling cell vacuoles with starch stores and leaving little room for nutrient stores. In other words, it reduces the capacity for luxury consumption of plants, especially nitrogen. Some of these studies even point to a reduction or near inhibition of nitrate assimilation. That’s a big blow to the jaw for us to try to get rid of the ammonia and only offer nitrate to the plants. This leads us to expect that plants subjected to very high concentrations of CO2 will show signs of nitrogen deficiency impossible to be remedied by further fertilization. It’s a matter of physiological blockage. Some aquarists have confirmed these seemingly unexplained problems. It’s an invaluable shared experience.

In the long run, these plants will be so gorged on starch that they will suffer malnutrition because they are unable to accumulate nutrients for more than a few days. They get tired and the aquarium goes into decline because there will be no consumption. The laws of rhythm collapse and the algae take advantage. It is under this concept that I invite you to study my article “stability x balance” and understand the principle of hormesis. Plants need occasional moments of scarcity to get stronger. I think I’m the first person and maybe the only person in the world to talk about it, totally against the incoherent plastered and automated stability that people want to submit a natural aquarium. Try to keep an aquarium for more than 2 or 3 years yielding beautifully and you will understand what I say. Things go off the rails and only lack of initiative can save you. This reminds me of psychoanalyst Donald W. Winnicott that children whose mothers are more absent develop better and more independent than those children whose mothers are overly protective. It is what he calls a “good enough mother” as an ideal mother, one who does not nullify the child’s independence and allows her to make decisions and learn with good and bad consequences. In the long-term planted aquarium, it’s the same thing. Let’s be “good enough aquarists”. But how to teach this in a community that sins more for lack than for excess? This teaching is definitely not for the majority. I recommend that you make excessive mistakes first, that you overflow through excess before discovering the middle path.

Another problem is that, because the Calvin Cycle operates comfortably without the problem of photorespiration, C3 plants end up getting “lazy” in combating those reactive forms of oxygen that we saw earlier in the photolysis of water and start to suffer injuries by the accumulation of these. Who has seen leaves burn from orange holes under high CO2? I already had this problem, and I couldn’t solve it. I suspected the accumulation of sodium or an excess of some cation, but today I suspect the excess of CO2. I don’t have the answer, but I understand the question well and I’m more attentive.

But now let’s talk about the applicability of this information.

Who are these warnings for? In fact, for a few hobbyists. The most relevant fact at this moment is that the more CO2, the more favorable the conditions for the plants and the lesser the chances of algae outbreaks. That’s because the vast majority of aquarists still miss terribly in the proper supply of CO2 with procedures such as counting bubble flow, relying on the drop checker and other nonsense. A very small portion of aquarists work with a focus on CO2 metabolism and assiduously apply the laws of rhythm. This problem of excess CO2 is applicable to high-performance aquarists, usually contestants, who can exceed 80 mg/L of CO2. I’ve seen people working with more than 120 mg/L!!! This is not a concern for you operating at 30 mg/L.

In any case, we don’t know at what point in the CO2 concentration these problems get bigger and start to really become a problem. I suggest turning around 40 mg/L, but there may be aquariums that need more. Sometimes what changes is to keep in mind what can happen instead of acting. What really matters is to keep in mind that CO2 will influence the system’s rhythm and incorporate this law into the behaviors with our aquariums. This information came to show that the issue of rhythm is much more complex and difficult than we imagined. For the less experienced, I stick to my recommendations: take your foot off the accelerator, work with less light, work well with CO2 and provide nutrients in abundance. Direction is fundamentally more important than speed.